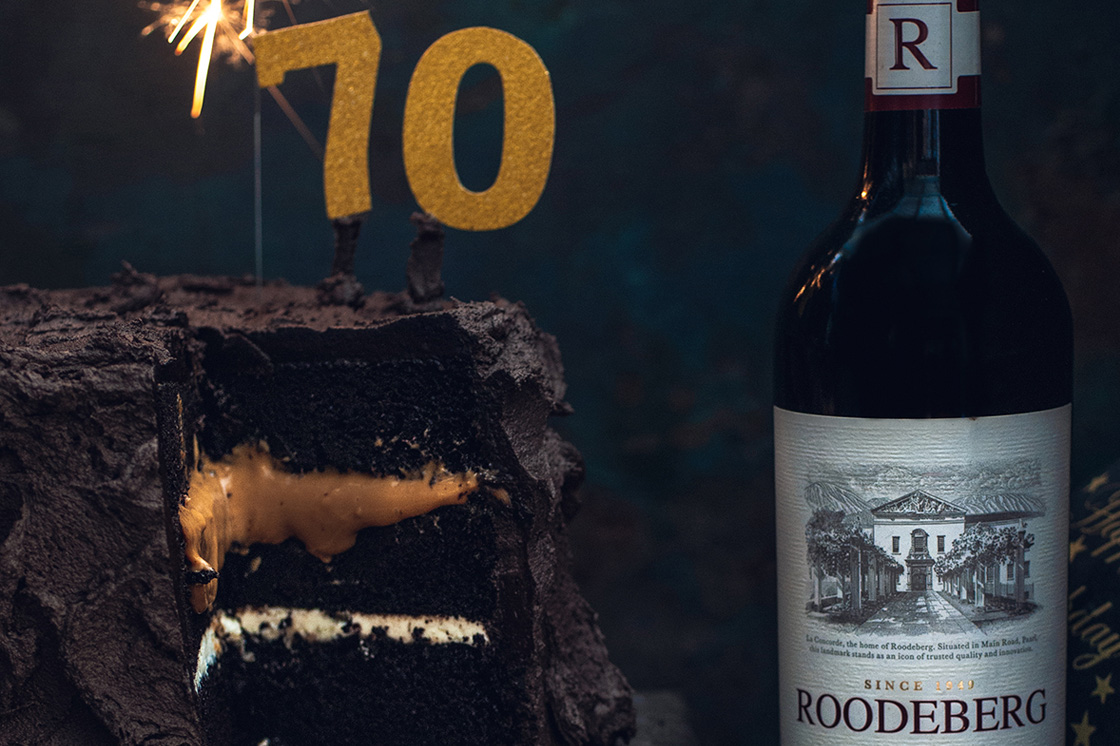 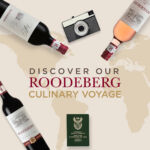 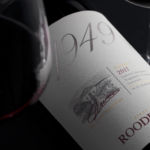 Celebrate Roodeberg’s 70 years of bringing friends together the world over by taking 70 minutes out of your day to create a delicious meal for your family.

Understanding the pivotal role of food and wine in creating memorable moments, Roodeberg partnered with four popular foodies to develop mouth-watering 70 minute recipes to enjoy with this classic red blend. The foodies were given free rein to play with tastes and textures to complement the Roodeberg Red.

Charmaine Ramalope-Makhubela of Glamfoodie, Luyanda Mafanya of Cooking with Luyanda, and Sam Linsell of Drizzle and Dip each chose a hearty meat dish as the perfect taste partner. Charmaine chose a beautifully crafted beef Wellington wrapped in a pastry lattice, Luyanda opted for a rack of lamb, while Sam Linsell decided on oven baked meatballs. Both Charmain and Sam included the Roodeberg as one of the ingredients in their recipes. For the ultimate indulgence, popular TV chef Anél Potgieter opted for a decadent chocolate cake.

A true South African original that has stood the test of time, Roodeberg is the heart and soul of memorable get-togethers. The wine’s rich heritage and colourful tapestry of wine folklore, has seen this signature red evolve from the master’s original blend to an accessible, contemporary classic in step with ever changing tastes and lifestyles yet still grounded in tradition.

While the beef is cooling, chop the mushrooms as finely as possible so they have the texture of coarse breadcrumbs.

Place a piece of cling film over a large chopping board. Lay the slices of bacon on the cling film, slightly overlapping. Spread the mushroom mixture over the bacon. Place the fillet on top. Use the cling film’s edges to draw the bacon around the fillet, then roll it into a sausage shape, twisting the ends of cling film to tighten it as you go. Chill the fillet while you roll out the pastry.

Dust your work surface with a little flour. Unroll the puff pastry. Remove the fillet from the cling film and put it in the centre of the pastry. Wrap the pastry around the fillet. Cut off any excess and use to decorate. Brush the pastry’s edges with the beaten egg to seal. Gaze all over with more beaten egg. 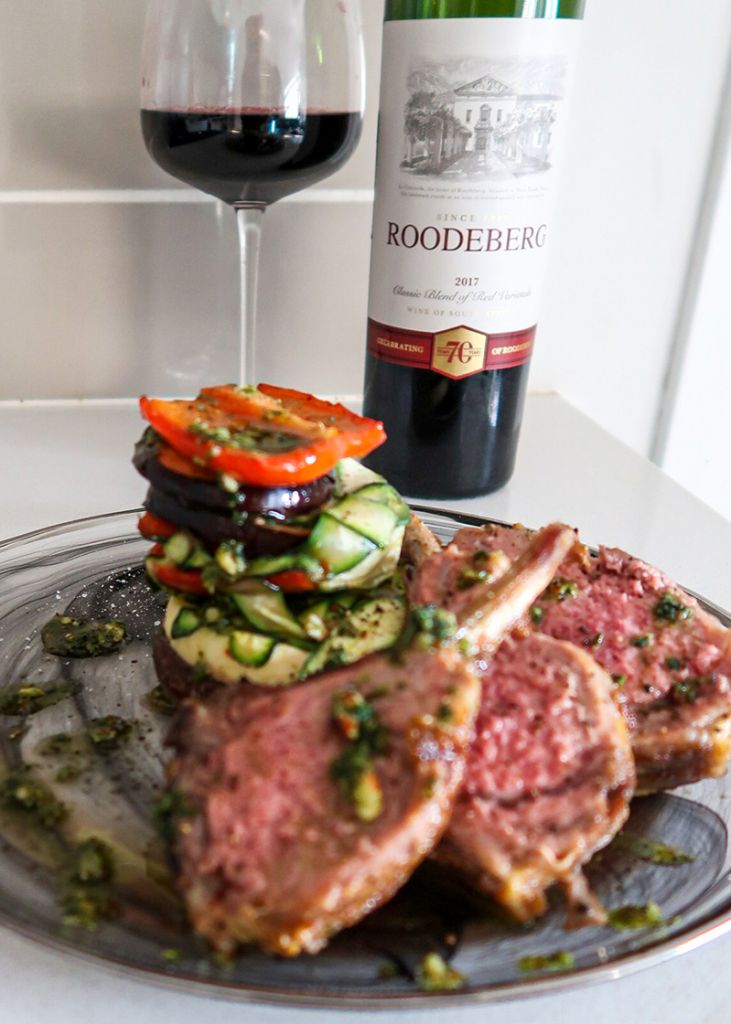 Score frenched rack of lamb and season with salt & pepper.

Marinate the rack of lamb and allow to sit for 1 hour before roasting.

Once lamb is marinated, heat oil in a pan on high heat and place lamb rack skin side down to render the fat down and get colour on the meat. Brown on all sides, then transfer to an oven proof dish.

Lay mushroom, haloumi, pepper, eggplant and zucchini on top of each other to make a stack, drizzle with olive oil and roast in an oven proof dish for 30-35 minutes at 180°C

Method:
In a food processor/blender: Add garlic, almonds, mint and parmesan, pulse until smooth then add your olive oil and combine.
Season with salt and pepper.

Serve your rack of lamb with the vegetable stack and drizzle with the mint pesto and pair this with Roodeberg Red. 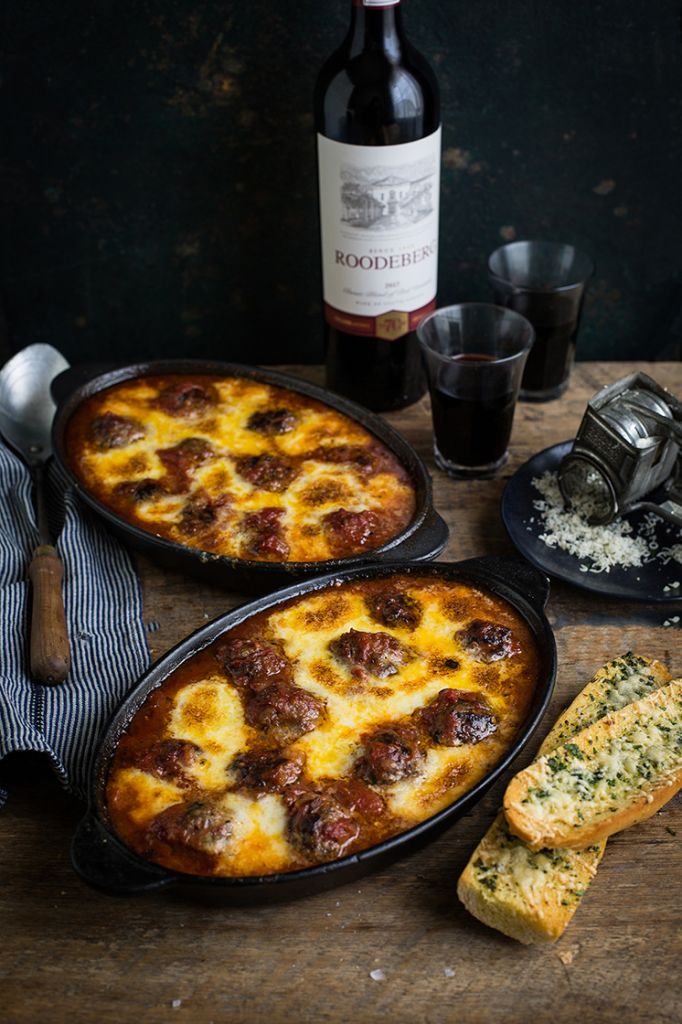 Method:
Preheat the oven to 180C. Chop the onion. In a non-stick frying pan, sweat the onion in some olive oil for about 4 – 5 minutes until softened but not browned.

Divide this cooked onion in two and put half in a medium-sized bowl (this will be for the meatballs) and the other half in a medium-sized pot for the sauce. Add the crushed garlic to the onions in the pot for the sauce and fry for a minute. Then add the red wine and allow this to cook off. Add the tomatoes, bay leaves, sugar, butter, a pinch of chilli flakes (if using), salt and pepper and allow this to bubble for about 20 minutes until thickened.

While the sauce is cooking, make the meatballs. Into the bowl with half a cooked onion, add the mince, breadcrumbs, finely chopped parsley, oregano, fennel seeds, salt & pepper and egg. Mix this until well combined. Make meatballs using a small cookie scoop or tablespoon measure. You want the meatballs to be quite small in size and you should get around 20 – 22 meatballs out of the mixture.

Once made, heat another splash of olive oil in the non-stick pan you fried the onions in and fry the meatballs until golden on all sides. You can do this by swirling the pan around. They do not need to be cooked right through. Decant these into an appropriately sized oven dish.

Shred the mozzarella and mix with the mascarpone to form a thick paste.

The sauce should have been bubbling for 20 minutes, then decant it over the meatballs. Dollop pieces of the cheese mixture around the top of the dish and cover it with foil (or a lid if the baking dish has a lid). Bake in the oven for 20 minutes. Remove the foil and put it back into the oven for a further 10 – 13 minutes. At around the 9-minute mark, turn the oven to grill (broil) and watch the cheese as it starts to bubble and go brown. Remove it from the oven and set aside for a few minutes.

While the meatballs are in the oven baking, make the garlic bread. Cut the baguette into 3 equal parts and then slice these thirds into half horizontally. You will now have 6 pieces of bread. Put the butter, garlic and parsley into a small bowl and microwave for 2 minutes or heat on the stove for a similar time (cook for at least a minute after the butter starts to bubble. Place the sliced bread cut side up on a baking sheet lined with paper and brush the garlic butter over the entire surface. Brush the underside lightly with butter if you have any leftover. Grate the parmesan on the fine side of a grater and sprinkle this over the bread. Place this in the oven about a third of the way down and watch closely as it cooks. It will take about 5 – 10 minutes to turn golden brown. Watch this very closely.

Serve this with the baked meatballs that should still be bubbling and hot. 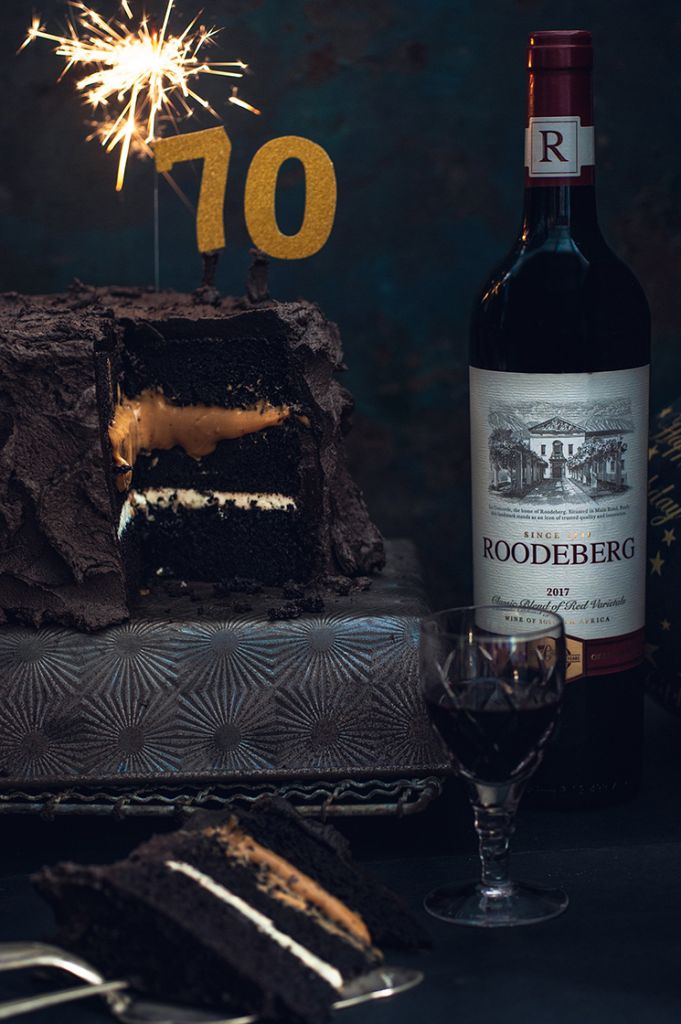 In a large mixing bowl and with an electric mixer, whip the sugar, eggs and vanilla essence until light and thick. With the mixer still on, slowly add the oil and mix until incorporated. Mix in the espresso shots followed by the buttermilk.

Sift in the cake flour, cocoa powder, bicarbonate of soda and the fine salt. Mix until well combined.

Divide the batter evenly between the three cake tins.

Bake in the oven for 35-45 minutes or until a skewer comes out clean.
Remove from the oven and allow to cool completely before removing from the cake tins.

For the icing:
In a large mixing bowl and with an electric mixer, whip the butter, icing sugar and vanilla essence for 10-15 minutes. Once light and airy, remove 1/3 of the icing and place in a large piping bag fitted with a large round nozzle. Add the cocoa powder and espresso to the remaining icing and whip for 5 minutes until well incorporated.

Back to media releases page

Not For Sale To Persons Under the Age of 18.

Get exlusive updated on events and news.